From Lawyer to Therapist 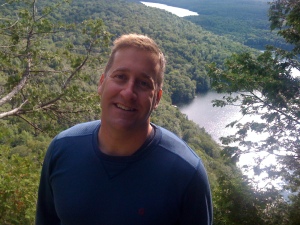 Will Meyerhofer is a psychotherapist whose online forum, The People’s Therapist, is especially popular among lawyers.   Psychotherapy is his third and most satisfying career.  His first was law.

Will comes from a family of therapists, including both parents and his brother, but he went to law school instead, in part because he loves to write.  He hated the adversarial nature of his law firm work from the start.   Group therapy sessions that he had started going to in law school became invaluable when he was an associate.   As a consequence of his misery, Will stopped performing at work.   His supervisors noticed, and suggested that perhaps Sullivan & Cromwell was not the right place for him.

He had forty-one informational interviews.   Networking and his persuasive skills led him toward his next job: a junior marketing position at Barnes & Noble.   Although he took a 50% pay cut, his work was more engaging at first.  After a while, however, he became bored.  He liked books, but sales didn’t motivate him.  He set out to change careers a second time.

“I told a friend that I needed someone to remind me who I was, and that I was unique and skilled,” he says. “He told me that I was a good listener.  I knew that on some level, but it helped to hear it from someone else.”    After talking with a lot of therapists, including his brother, he decided to become a therapist himself.

To do so, he had to go back to school for two years and incur another $35,000 of debt – a fraction of what he would have owed at a private university.  “I highly recommend cheap schools,” he says.   When Will graduated, he got a part time clinic job, earning less than $27,000. Almost immediately, he started seeing private clients.  After five or six years in practice, he was making a six-figure salary again.

But he is not in it to get rich, he says.  He is in it to be happy, and he is.  After all, he says, “what would you pay if I could guarantee you would be happy about what you were doing all day?”

His own story illustrates what can happen when you have the courage to start again –  in Will’s case, twice.   Will went from being miserable at his law firm job to being happier at Barnes & Noble to absolutely loving his work as a therapist.   After some hard start-up years, he now has as many clients as he wants.  He finds it immensely rewarding to help people live better lives on a daily basis.  He likes being his own boss and setting his own schedule.

Will knows, from personal experience and that of his clients, the value of figuring out what is truly going to make you happy.  “If you miss that challenge,” he says, “you miss a real opportunity for joy.”

One response to “From Lawyer to Therapist”